Is Philosophy Able to Think the Present?

The Ideological Structure of the Contemporary World 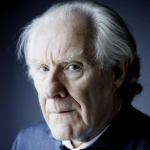 ALAIN BADIOU holds the Rene Descartes Chair at the European Graduate School (EGS). Badiou was a student at the École Normale Supérieure (ENS) in the 1950s. He taught at the University of Paris VIII (Vincennes-Saint Denis) from 1969 until 1999, when he returned to ENS as the Chair of the philosophy department. He continues to teach a popular seminar at the Collège International de Philosophie, on topics ranging from the great ‘antiphilosophers’ (Saint-Paul, Nietzsche, Wittgenstein, Lacan) to the major conceptual innovations of the twentieth century. Much of Badiou’s life has been shaped by his dedication to the consequences of the May 1968 revolt in Paris. He is the author of several successful novels and plays as well as more than a dozen philosophical works.