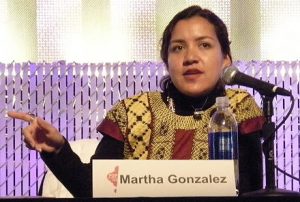 MARTHA GONZALEZ is a Chicana artivista (artist/activist) musician, feminist music theorist and Assistant Professor in the Intercollegiate Department of Chicana/o Latina/o Studies at Scripps/Claremont College. Her academic interest has been fueled by her own musicianship as a singer/songwriter and percussionist for Grammy Award winning band Quetzal. Quetzal has made a considerable impact in the Los Angeles Chicano music scene. The relevance of Quetzal’s music and lyrics have been noted in a range of publications, from dissertations to scholarly books. Together with her partner Quetzal Flores, Gonzalez has been instrumental in catalyzing the transnational dialogue between Chican@s/Latin@ communities in the U.S and Jarocho communities in Veracruz, Mexico. Gonzalez has also been active in implementing the collective songwriting method in correctional facilities throughout California and Seattle WA. Gonzalez is currently working on a book manuscript, Chican@ Artivistas: East Los Angeles Trenches, Transborder Tactics.