“Looking Back, Looking Forward: A Conversation between Barbara Ehrenreich and Matt Rothschild”

The Havens Center’s Award for Lifetime Contribution to Critical Scholarship is given to individuals who have combined in their work and careers a strong commitment to social justice with intellectually rigorous scholarship. Barbara Ehrenreich is the fifth recipient of the Award. Past recipients have included Frances Fox Piven, Howard Zinn, Noam Chomsky, and Eduardo Galeano. 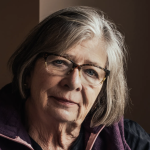 BARBARA EHRENREICH is the author of 21 books, including The New York Times best sellers, Nickel and Dimed: On (Not) Getting By in America (2001) and Bright-Sided: How Positive Thinking Is Undermining America (2010). Ehrenreich’s latest release, Living with a Wild God (2014) is a brave and honest memoir unlike anything she’s written before. In it, she reconstructs her childhood mission, bringing an older woman’s wry and erudite perspective to a young girl’s impassioned obsession with the questions that torment us all. The result is a searing memoir and a profound reflection on science, religion, and the human condition. Ehrenreich is also a frequent contributor to The New York Times, Harpers, The Progressive magazine, and Time magazine, and has appeared on Oprah, The Daily Show, The Colbert Report, and The Joy Behar Show, to name a few. Before becoming an activist, Ehrenreich studied cell biology and physics, graduating with a degree in physics from Reed College in 1963 and a Ph.D. in cell biology from Rockefeller University in 1968. However, after completing her studies, Ehrenreich became involved in the anti-Vietnam war movement and began to question whether she wanted to spend her life at the laboratory bench. Ultimately, she chose to turn her attention to political and anti-war activism. Over time, her work life settled into three tracks, which continue to this day: journalism, book-length projects, and activism on such issues as health care, peace, women’s rights, and economic justice.

MATT ROTHSCHILD is the senior editor of The Progressive magazine, where he has worked since 1983. He was editor-in-chief from 1994 to September 2013, and publisher for most of the period from 1989-2013. He also served as associate editor and managing editor. Prior to coming to The Progressive, he worked as the editor of Multinational Monitor, a magazine founded by Ralph Nader. Rothschild is the author of You Have No Rights: Stories of America in an Age of Repression (New Press, 2007), and the editor of Democracy in Print: The Best of The Progressive, 1909-2009 (University of Wisconsin Press, 2009).