Russia and the Global Crisis 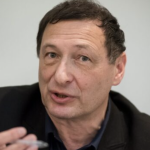 BORIS KAGARLITSKY is Director of the Institute of Globalization and Social Movements in Moscow and a well-known international commentator on Russian politics and society. Kagarlitsky was co-ordinator of the Moscow People’s Front between ’88 and ’90, and also advised the Workers’ Committee of Prokpievsk and Karaganda during this period. He was a deputy to the Moscow City Soviet between 1990-93, during which time he was a member of the executive of the Socialist Party of Russia, co-founder of the Party of Labour, and advisor to the Chairperson of the Federation of Independent Trade Unions of Russia.  Previously, he was a student of art criticism and was imprisoned for two years for ‘anti-Soviet’ activities. His books include Empire of the Periphery: Russia and the World System, Russia Under Yeltsin And Putin: Neo-Liberal Autocracy, New Realism, New Barbarism: The Crisis of Capitalism, and most recently, From Empires to Imperialism: The State and the Rise of Bourgeois Civilisation.