Race, Class and the Making of Postcolonial Britain

Workshop on Racism, Capitalism and the Struggle to be Human

Racial Formation and the Crisis of Welfare Capitalism

Antiracism and Stretching the Language and Politics of Class 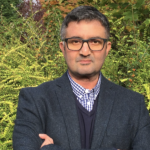 SATNAM VIRDEE is Professor of Sociology at the University of Glasgow and founding Director of the Centre for Research on Racism, Ethnicity and Nationalism (CRREN). He is a historical and political sociologist with research interests in racism, class and historical capitalism. He is the author and co-author of 5 books, including most recently Racism, Class and the Racialized Outsider (Palgrave Macmillan, 2014). He will publish a co-authored volume in 2017 (with Stephen Ashe and Laurence Brown) entitled: Britain’s Civil Rights Movement: Black Activism and the Mobilization of Changing Ethnic Identities and a co-edited collection (with Brendan McGeever) entitled Socialism and Antisemitism, 1880-1917.