Navigating the Storm: Organizing in a Right-wing Context & Building Resistance in the Era of Trump

Co-sponsored by the Department of Afro-American Studies 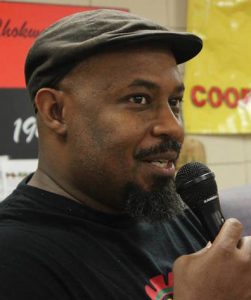 KALI  AKUNO is the co-director of Cooperation Jackson, an emerging network of worker cooperatives and supporting institutions based in Jackson, MS. Cooperation Jackson seeks to create economic democracy and a vibrant solidarity economy in Jackson that will help to transform Mississippi and the South. Kali served as the Director of Special Projects and External Funding in the Mayoral Administration of the late Chokwe Lumumba of Jackson, MS. His focus was supporting cooperative development, sustainability, human rights and international relations. He is also the former Co-Director of the US Human Rights Network and served as the Executive Director of the Peoples’ Hurricane Relief Fund (PHRF) based in New Orleans, Louisiana after Hurricane Katrina.