“A New Origin Narrative”: African American and Latina/o Histories in an Age of Neoliberal Crisis

The Mexican War of Independence and US History: Tearing Down American Exceptionalism and Moving Forward in the 21st Century

Co-sponsored by the Center for the Humanities 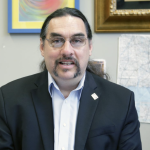 PAUL ORTIZ is Associate Professor of History and the Director of the award-winning Samuel Proctor Oral History Program at the University of Florida. His publications include the Emancipation Betrayed, a history of the Black Freedom struggle in Florida, and the co-edited volume, Remembering Jim Crow: African Americans Tell About Life in the Jim Crow South, which recently went into its 4th printing. His forthcoming monograph is titled: Our Separate Struggles Are Really One: African American and Latino Histories. He is also co-author (with William H. Chafe) of the forthcoming book, Behind the Veil: African Americans in the Age of Segregation, 1895-1965.