The Future of Struggle: The Changing Repertoires of Collective Action 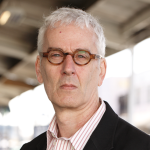 JOSHUA CLOVER is Professor of English at the University of California, Davis. He specializes in 20th/21st century poetry and poetics, Marxism, political economy, world-systems analysis, crisis theory and cultures of finance, with an interest in environment, feminism, and political struggle in literature. A widely published and translated essayist, poet, and cultural theorist, his most recent books are Red Epic and Riot.Strike.Riot: The New Era of Uprisings, a theorization of riot as historical phenomenon which opens onto a revised history of capital accumulation (forthcoming from Verso in 2016).