The Right to Stay Home: Justice for Migrant Workers and Sending Communities

The Radical Resistance to Immigration Enforcement 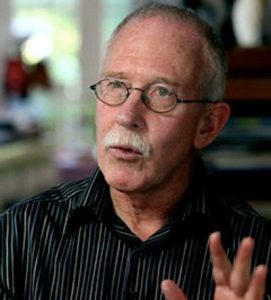 DAVID BACON is a California-based writer and photographer, and former union organizer.  He is the author of several books about migration:  The Children of NAFTA: Communities Without Borders, Illegal People: How Globalization Creates Migration and Criminalizes Immigrants, and The Right to Stay Home. His latest book is In the Fields of the North / En los Campos del Norte, copublished by the University of California Press (Berkeley) and the Colegio de la Frontera Norte (Tijuana), which documents the lives of farm workers in photographs and narratives. Bacon was a factory worker and union organizer for two decades with the United Farm Workers, the International Ladies Garment Workers, the United Electrical Workers and other unions. Today he documents the changing conditions in the workforce, the impact of the global economy, war and migration, and the struggle for human rights. His photography has been exhibited in the U.S., Mexico, and Europe, and his articles and photoessays have been published widely. David Bacon has been documenting the lives of farm workers through photographs and journalism since 1988.