Mobilizing Inclusion: Getting Out the Latino Vote

Living the DREAM: The Political Lives of Undocumented Latino Youth 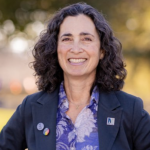 MELISSA R. MICHELSON is Professor of Political Science at Menlo College. She received her B.A. in political science from Columbia University in 1990, master’s degrees from Yale University in 1991 and 1994, and her Ph.D. from Yale University in 1994. Her major strands of research include Latino political incorporation, field experiments in voter mobilization of ethnic and racial minorities, and field experiments on fostering attitudinal change on polarized political issues such as same-sex marriage. She is co-author of the award winning book Mobilizing Inclusion: Redefining Citizenship through Get-Out-the-Vote Campaigns (New Haven: Yale University Press, 2012), as well as Living the Dream: New Immigration Policies and the Lives of Undocumented Latino Youth (Paradigm Publishers, September 2014). She is currently working on another book manuscript, Listen, We Need to Talk, contracted with Yale University Press, which uses field experiments to explore how to generate attitudinal change on contentious political issues such as same-sex marriage. She has published dozens of articles in peer-reviewed academic journals and a dozen chapters in edited volumes. In her spare time Dr. Michelson knits and runs marathons.